We Semi-Destroyed the Klamath: A mid-life tale of a legendary river.

As I preluded in the previous post, reading Cadillac Desert shortly after fishing a little known stretch of the legendary Klamath River has turned out to be a curious coincidence.  Not because of any random happenstance, but mainly because I realized that my first time fishing the Klamath just happened to be smack dab in the midpoint of the Klamath River's life.  Like meeting a new friend right after he just got married and popped out a kid, I knew the Klamath as I met it, was nothing like its first chunk of life and nothing like it was going to be in its next portion of life.

You know you've entered the Klamath basin when dams become the beginning and end of all dialogue. Hastily hand-drawn signs lean against mailbox posts spelling out, "Keep the Klamath", "Stop the Scams", "Restore the Klamath", "Remove the Dams" and the occasional "O-blah-blah-blah-ma". Even though the concrete structures are less Hoover and more Carter, their presence is unavoidable. 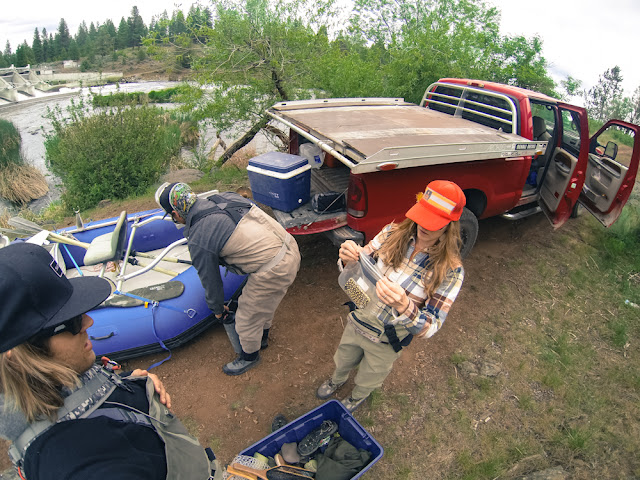 As you dip down below the Keno dam the Klamath's high canyon walls tell you stories of centuries of biblical torrents carving through protruding sienna red lava. The slow lapping pools of water and lake front ranch style homes lining the shores behind the Klamath's 5 dams are the yin to the Klamaths wild yang.  The contrasts of scenes help quantify what exactly Southern Oregon would have looked like if the Bureau of Reclamation's failed attempt to run the Klamath in reverse to divert its entire flow to quench Los Angeles' dusty thirst would have actually succeeded. 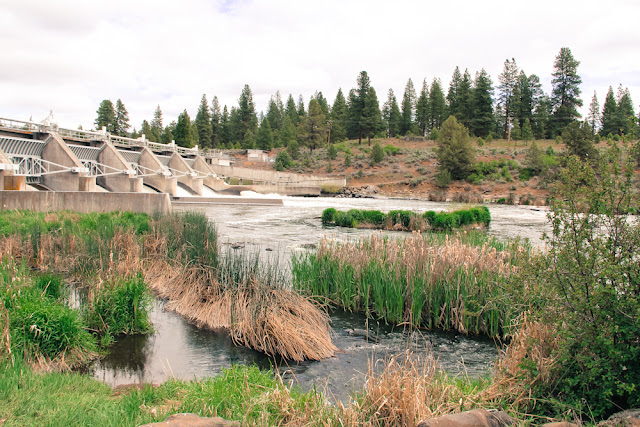 Launching the boat into the warm chocolaty waters immediately brings to notice that these dams not only have stopped up one of the largest Salmon and Steelhead runs in the West but also but the trout that are in the water under constant pressure from above average water temps and low visibility.  This makes the Spring time where the water is just the right temperature to make it just about the only friendly time to hook and release the trout that still live in the waters between the dams. 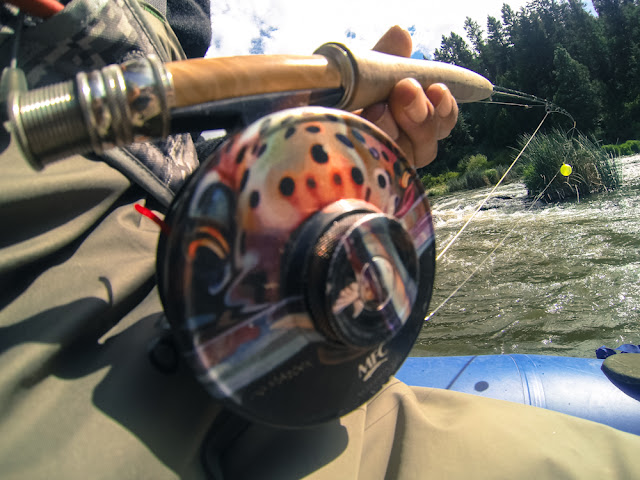 As we pushed down stream with one of my favorite fishing partners, Dave Lass of Trout Unlimited, he  started confidently flicking the oars to guide us through the tricky and somewhat big water of the Klamath. If you're not an expert rower, the Klamath's boat swallowing holes and narrow chutes between sharp rocks will make for a very wet and extremely dangerous day.  Only expert rowers are advised. 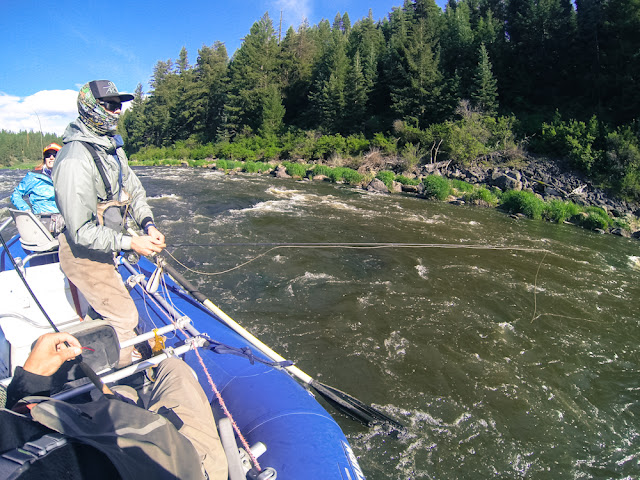 After getting through some tricky water we dropped the anchor in some midstream eddy's and started fishing. And then, someone switched on the "Fuck Yeah!" switch. 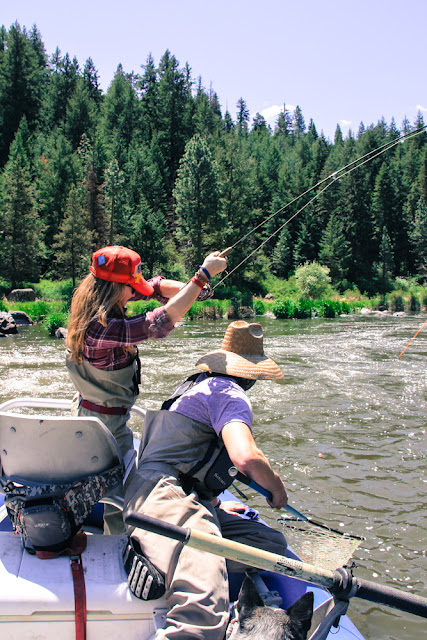 Whether it's the mentality of being hardy survivors or their Klamath ancestry, these trout fight like no non-anadromous fish I've ever caught.  When hooked, their downstream runs will turn your reel volume up to eleven.  Their aerial attacks leave you bowing like they were some sort of fresh water mini-tarpon. You'll feel a 24 inch fish on the line and bring up a 12 inch fish.  They're truly incredibly fish. 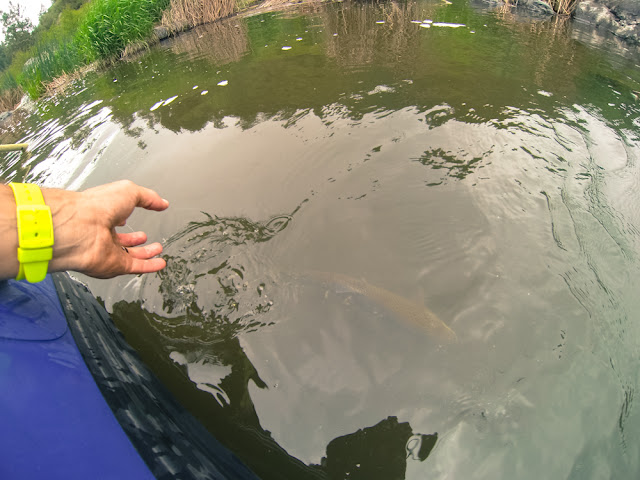 In the warm(er) waters of the Klamath, a close watch on making sure the fish is fully revived and back to complete swimming capability was a high priority.  Releasing the fish healthy is half the battle of Catch and Release. 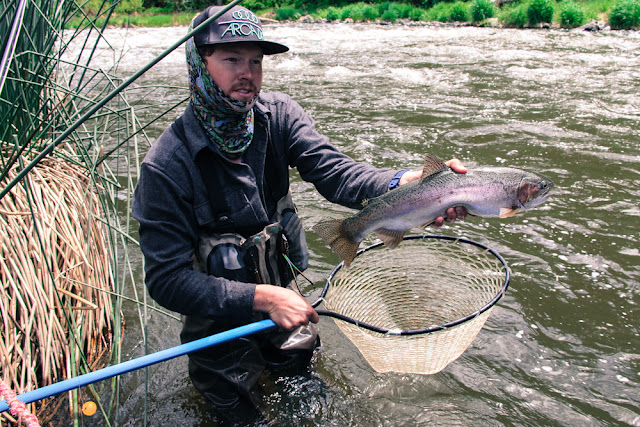 The Klamath's fish were found in water I've never quite fished before.  Their mentality and survival among their difficult living conditions has made them adapt heavily.  As you can see, some of them have adapted quite well. 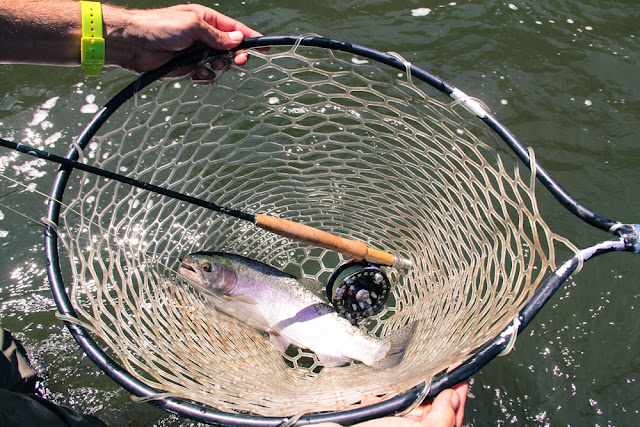 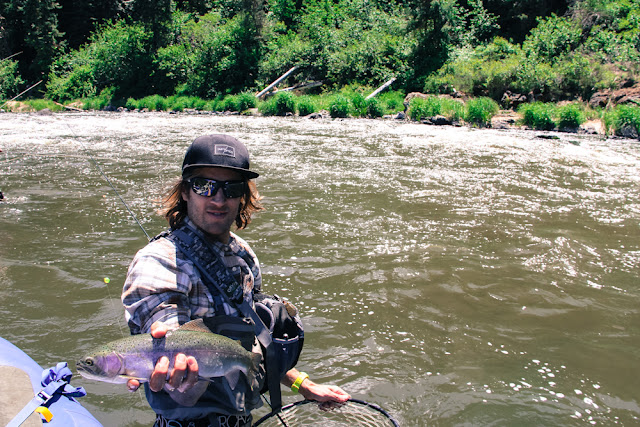 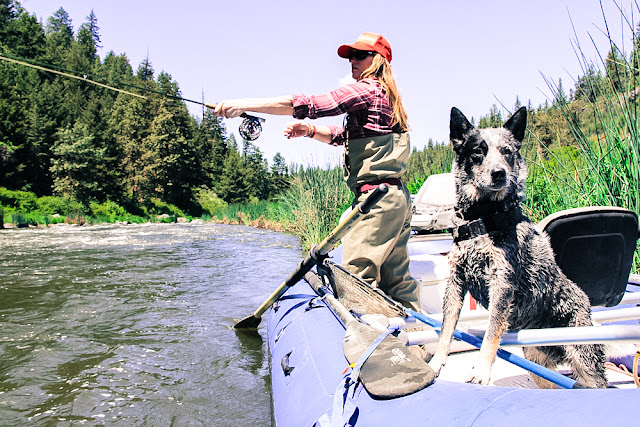 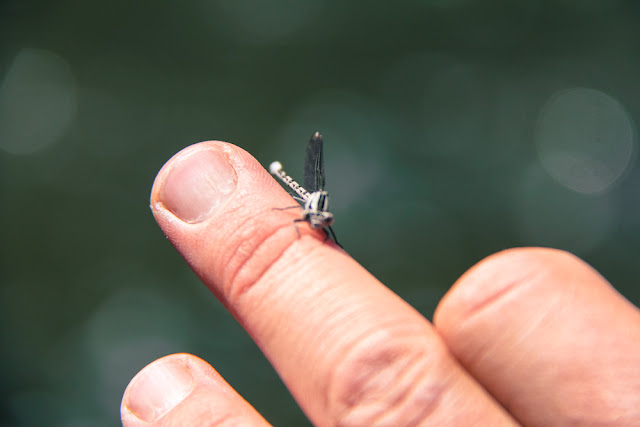 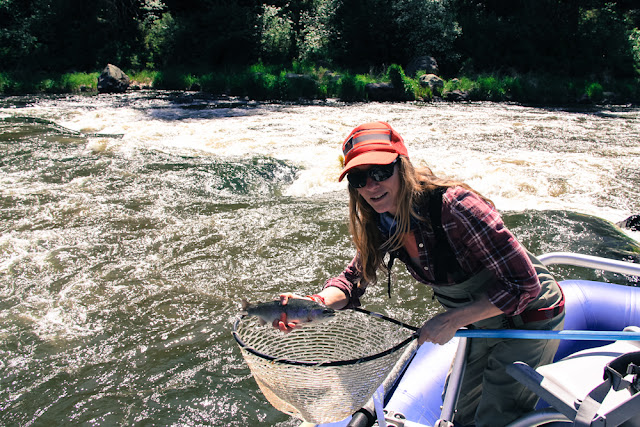 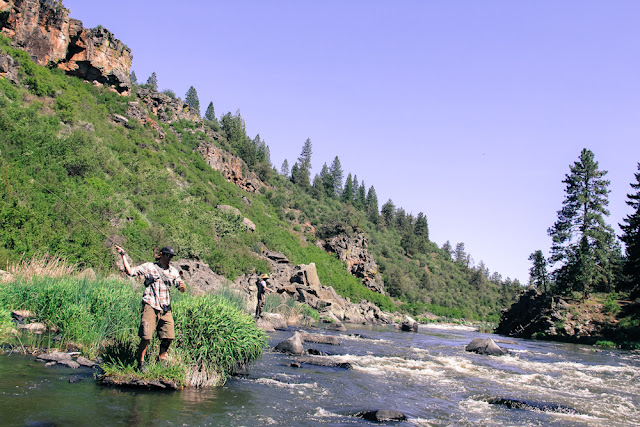 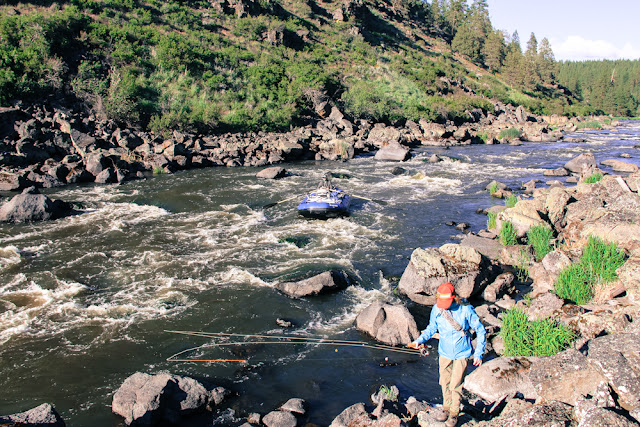 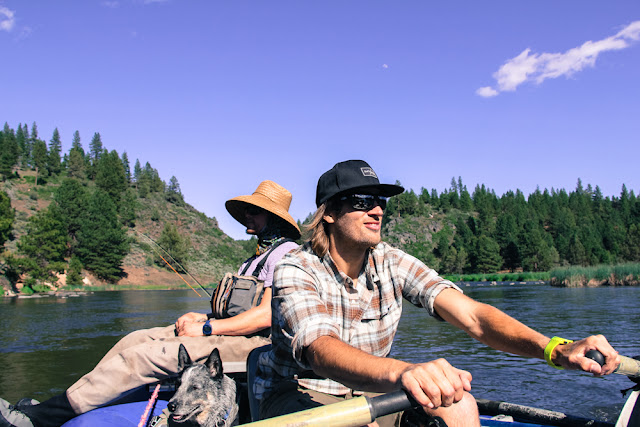 After exiting the last tricky run we paddled across the extremely shallow flats of JC Boyle Dam Lake.  Osprey's circled looking for any unlucky movers. Massive White Pelicans perched themselves among the rocks waiting for hapless fishy victims as well.  In the distance gun fire popped and occasionally made us instinctively duck our heads as we skirted a recreational gun range.  As we slowly moved on, Dave gave me a history lesson of the politics and struggles to bring down these inefficient, ineffective and useless dams.  I'm not some greenie hippy wanting to tear down dams just to tear them down. I understand the necessity of water allocation, energy production and flood prevention for the good of human society.  But there are dams across this country that were built for none of these reasons.  Bureaucratic job security, political corruption, pork barrel politics and corporate welfare very often were the primary reason for a four decade long dam building frenzy.  The Klamath dam removal project is backed by not only the usual conservation groups but the group that owns them, PacifiCorp  There are many more backers from both sides of the aisle, including the builders of the dams themselves, the Federal Government.  Only a minor few currently hold this restoration project up, mainly a few "No Hear-No See-No Do" Republican congressmen, a few lakeside homeowners worried about their property values and I'll take a wild guess that the specter of Dick Cheney is somehow involved aswell.

Ultimately there are lingering issues with water management that still need to be brought up for the restoration project, namely providing enough water for the humans in the area and the anadromous fish.  But overall, the Klamath is a legendary river that unfortunately suffered under a bad side-effect of human society  It's history is a mirror to our history of the development of the West coast and we have a chance to right some wrongs.  I hope one day my kids will not only have the water they need to survive but the ability to land a Chinook Salmon in my homeland.

With that, I leave you with two pics of the most insane Mayfly hatch I've ever seen.  Cheers, 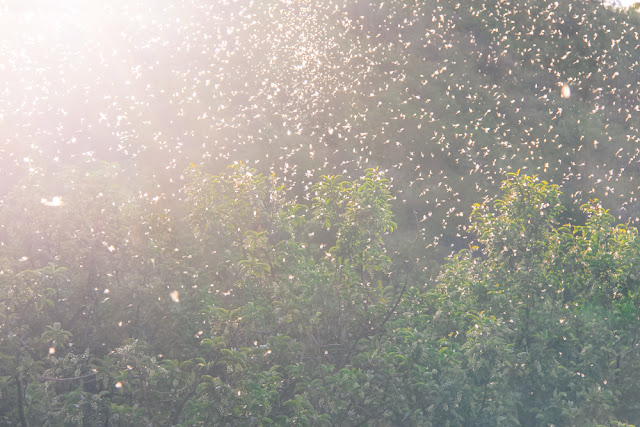 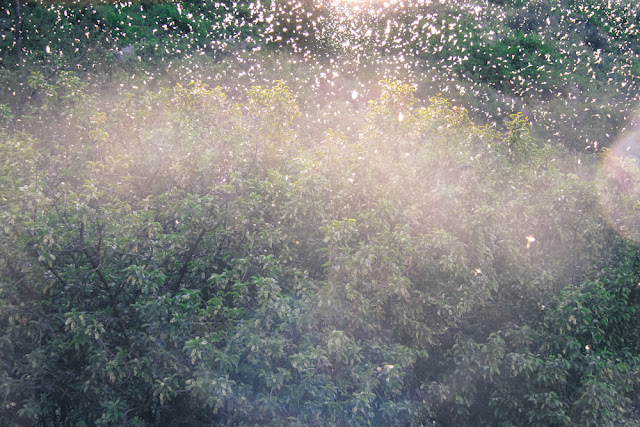